Sightseeing near the hotel

CHURCH OF OUR LADY OF VLADIMIR 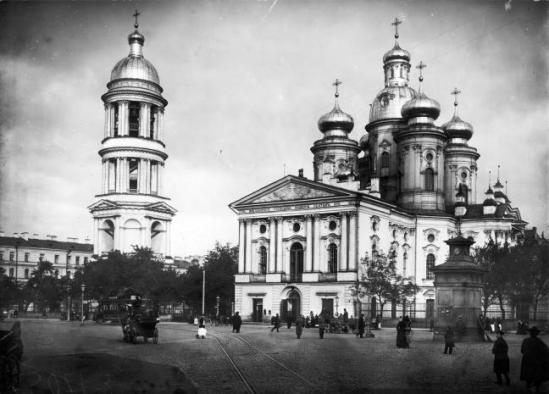 located at 20 Vladimirsky Avenue . An architectural monument in a transition style merging Baroque with Classicism. The church was constructed on a trade square in 1761-69, presumably to the project of architect P. A. Trezzini, replacing the wooden church of the same name (1747). The five-dome church includes the Upper Church of Our Lady of Vladimir, which is unheated, and the Lower, heated, Church of St. John of Damascus. In 1791, architect G. Quarenghi completed the construction of a separately standing double-tiered bell tower. In 1830- 31, a vestibule (architect A. I. Melnikov) was constructed, in 1850-53 - a chapel and fence was added (architect F. I. Rusca), in 1883-85 side annexes (architect A. L. Golm) were also constructed. The church treasures the 18th century Baroque iconostasis that in 1808 was brought from the church of the Anichkov Palace .

In 1887-88, the church was restored. It was here that some of the celebrations in honour of nine-hundredth anniversary of the Christening of the Rus took place. From 1865, the charitable society of Church of Our Lady of Vladimir functioned here as did an orphanage and a women’s alms-house. In 1828 the burial service over Arina Rodionovna (nanny of Alexander Pushkin) took place here. In the last years of his life Fedor Dostoevsky was a parishioner of the church. In 1932, the Church of Our Lady of Vladimir was closed down and the building was taken over by the Lenmashuchet Factory. In 1989, the church was returned to the faithful and restored. Since May 2000, it has had the status of a cathedral. 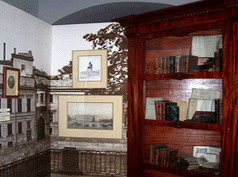 The F.M.Dostoevsky Literary-Memorial Museum opened 13.11.1971 in the house where F. M. Dostoevsky rented his last flat since 1878 and where he died on 28.1.1881. R. G. Klinkster's apartment house was partly rebuilt in 1882 according to the project by architect V. V. von Wirr. The second-floor flat was restored according to archive materials and the reminiscences of the writer’s contemporaries. The memorial part of the exposition includes the hall, the washroom, the drawing-room, Dostoevsky's study, the dining-room, the room of А. G. Dostoevskaya (nee Snitkina), the writer’s wife, and a nursery. Visitors can see Dostoevsky's personal belongings, which for the most part were donated to the museum by his descendants. The literary exposition (renewed in 1996), tells about the life and work of Dostoevsky and includes lifetime editions of his works, books and photographs with the signatures of the writer and his contemporaries, manuscripts, views of Dostoevsky's Petersburg, and book illustrations. The museum annually hosts international conferences on Dostoevsky and his influence on world culture. 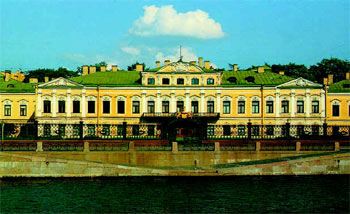 (34 Fontanka River Embankment), monument of Baroque architecture, family residence of the Sheremetev Counts. The lot was granted in 1712, by Tsar Peter the Great to Field Marshall, Count B.P. Sheremetev, who built a clay-walled house on it in the mid-1710s. His son, Count P.B. Sheremetev constructed a two-storied Baroque stone building with an attic, richly decorated by modelling in the late 1740s (architect thought to be S.I. Chevakinsky); plafonds in the front suite of rooms were painted by artist Legren. Behind the palace, a regular garden with a grotto, Hermitage pavilion, Chinese summer house (1750-60s, architect F.S. Argunov) were situated. The interiors of the Sheremetev Palace were reconstructed in 1795-96 (architect I.E. Starov), 1798-1801 (architect G. Quarenghi and A.N. Voronikhin), 1830s (architect I.D. Corsini). In 1811-13, two auxiliary wings were built (architect K. Meyer), in 1821-23 - Pevchesky (architect D. Quadri), in 1845 - Sadovy (architect I.D. Corsini) wings. According to Corsini's design, in 1838, a cast-iron patterned fence was installed at the side of the embankment. In 1867, a single-storey wing with the Sheremetev coat of arms over the gates was added to the palace on the left side (architect N.L. Benois). Since the early 19th century, Sheremetev Palace was one of centres of St. Petersburg ’s cultural life.

The concerts, in which the Counts Sheremetev chapel under the guidance of S.A. Degtyarev and G.Y. Lomakin took part, and literary soirees with participation of V.A. Zhukovsky, A.I. Turgenev, A.P. Bartenev and others were often held here. The Society of Ancient Literature Amateurs was situated in the palace, sessions of Russian Genealogic Society and Archeographic Committee, of which Count S.D. Sheremetev was a member, took place there. Count S.D. Sheremetev gave Sheremetev Palace with its art collections to the Soviet Government in 1918 (until 1929, the Museum of private life was located there). In 1940-88, the Arctic and Antarctic Institutes were situated in the palace; in 1990, the building was given to the Museum of Theatre and Musical Arts, which restored the front suite. In 1924- 52, A .A. Akhmatova lived in one wing of the Sheremetev Palace in the apartment of her husband N.N. Punin (since 1989, it has been converted into a literary and memorial museum to Anna Akhmatova). 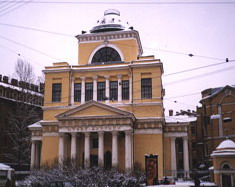 located at 24аMarata Street. It is the only museum in Russia and the biggest museum in the world devoted to natural environment of the polar regions of the Earth. It was established in 1930 as a department of the All-Union Institute of the Arctic (today the Institute of the Arctic and Antarctic) and opened to the public in 1937. The museum received its present name in 1958. The exposition contains the following sections:The collection of the museum (approximately 75,000 objects) include the personal articles of polar researchers, photographs, documents about the history of the development of the North Pole and the South Pole, expedition equipment, unique devices, model ships and dioramas. The ice explorer airplane S-2, the steering wheel of the Taimyr ice-breaker, a ring-buoy from the Chelyuskin steamer are among the items on exhibition. The museum conducts research work, organises thematic exhibitions and possesses an extensive library (consisting of some 6,000 volumes) with a reading room. It is housed in the building of the former St.Nicholas Edinoverie Church. 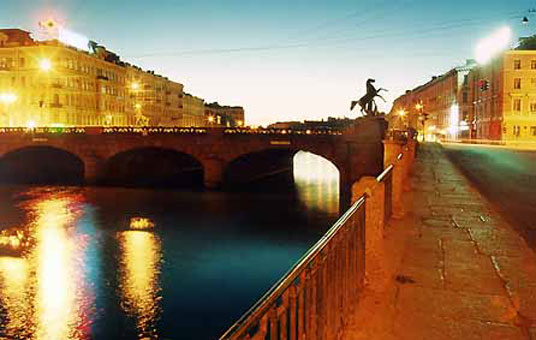 in 1739 Nevsky, spanning the Fontanka River on Nevsky Prospect. The first wooden bridge was built here in 1715 under the supervision of М.О. Anichkov (hence the name), in 1721 it was elevated (the master K. van Boles), in 1749 it was rebuilt (architect S. Volkov) and decorated with granite. In about 1783-85, it was rebuilt in stone to the standard design (see article Belinskogo Bridge), in 1841 it was reconstructed (engineers I.F. Buttatz, А.K. Reder, A.D. Gotman; railings with trellis motives of the Palace Bridge across the Spree River in Berlin): the three span framework consists of vaults and facing arches from red granite, the props of rough masonry are faced with granite.

In 1849-50, four sculptures of P.K. Klodt The Taming of the Horse were added. In 1906-08, it was rebuilt (engineers S. P. Bobrovsky, N.G. Krivoshein, architect P.V. Schusev) while preserving the architectural and structural form of the original; the bow shaped arches were replaced with torispherical arches. In November 1941, the sculptures were buried in the garden of Anichkov Palace ; solemnly returned 30 April 1945 (in 2000-01 restored). In 1941-44, the surrounding area of Anichkov Bridge was exposed to intensive artillery fire (it received the name "God! Bring it on!"). At the foot of the group of horses, there is a commemorative plaque. In 1991, curvilinear pieces of the cast iron trellises were renewed. The length of the bridge to the alignment of the embankments is 54.6 metres , the width 37.9 metres .

The Russian Museum today is a unique depository of artistic treasures, a leading restoration center, an authoritative institute of academic research, a major educational center and the nucleus of a network of national museums of art. The Russian Museum collection contains circa 400.000 exhibits. The main complex of museum buildings - the Mikhailovsky Palace and Benois Wing - houses the permanent exhibition of the Russian Museum , tracing the entire history of Russian art from the tenth to the twentieth centuries. The museum collection embraces all forms, genres, schools and movements of art. The Russian Museum holds many exhibitions both in Russia and abroad. The Museum holds more than 50 temporary exhibitions and organizes more than 10 in other cities and abroad annually. Catalogues, albums and booklets made by museum researchers accompany many exhibitions. Over the past twenty years, the museum complex has grown to include the Stroganov Palace , St Michael's (Engineers) Castle and the Marble Palace . The complex also includes the Mikhailovsky Gardens , Engineering Gardens , Summer Garden (including the Summer Palace ) and the House of Peter the Great. 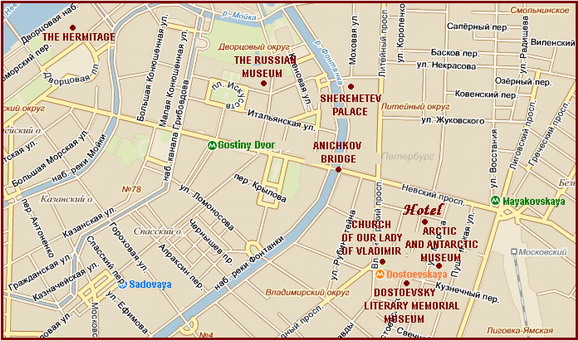